Do one-man band IFAs have a future? 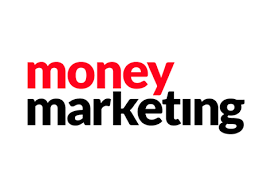 Do one-man band IFAs have a future?

What happens if my adviser falls ill? It is a question that a prospective client may rarely ask, but one that seems perfectly valid for a one-person firm.

What if you go on holiday and I’ve got a financial emergency? Who am I meant to turn to? What if you want to shut up shop and there’s no-one to take over?

A report by CWC Research in 2015 called No Small Change argued that because of increasing research, administration, compliance, IT and other costs, advice firms of the future will need to achieve “critical mass”.

The minimum size of a post-RDR advice firm is likely to be between 10 and 15 members of staff, with at least five advisers and three paraplanners, the report concluded.

Trade body Apfa’s – now part of Pimfa – most recent statistics show that the average number of advisers in a firm is 4.55. This has remained stable since the RDR, but are things about to change, as consolidators snap up more firms and network giants like St James’s Place and Openwork continue to grow adviser numbers?

Money Marketing looks at the prospects ahead for the one-man or one-woman band advice firm. 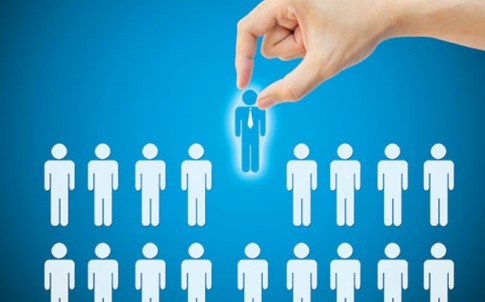 Few would doubt that being a sole trader IFA in the current climate is a tough job.

In an increasingly professionalised industry, smaller IFAs, particularly if they are, or want to become, chartered, will have to be organised enough to fit in exams and continuing professional development requirements around their client commitments.

Today’s sole advisers can obviously check emails and call or video conference clients even when they are on holiday, but the trade-off is cutting into the time that they spend unplugged from the office.

Automating other processes would help free up the time a one-person advice business would need. Many smaller firms are not known for being technologically savvy, however, with some key exceptions.

Core Financial sole adviser Trevor Whiting says it is the cost of regulation that looms largest for small firms, though. His combined FCA and Financial Services Compensation Scheme bill for this year was £9,600, up from £6,000 the previous year, he says.

He says: “It’s becoming a lot harder because the increase in fees we have as a business impacts so much more. It really matters to the individual smaller business when the FSCS levy is going through the roof and you’ve got professional indemnity too. Bigger businesses can spread that a bit more.”

He also notes that clients do raise the issue of succession planning.

He says: “There are issues about continuity. What happens is that some clients will say ‘I like what I’m getting with you, with an amazing service, you’re very responsive, but what happens when you die, or whatever?’ There’s no continuity plan in these smaller firms. They’re good for today, but what are they like for tomorrow?”

Average retail investment revenue was also slightly lower in one-person firms than in any other kind of firm; £130,000 compared to £140,000 for firms with more than 50 advisers.

Acting on your own does give you the freedom to run your business exactly how you think it should be run, though. This is the case with Klonowski and Co sole adviser Francis Klonowski, who wanted to run a fee based practice back in the mid-90s, so left his IFA firm to go it alone.

It also suits personalities that like to set their own direction or prefer to concentrate on their own work rather than getting involved in team projects. 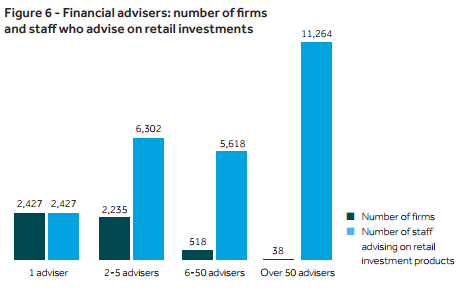 The FCA’s data on the size of advice firms

Klonowski, in his mid-60s, certainly isn’t looking to hang up his boots in a rush. He says: “After 21 years, I may be a bit biased, but I think [the one-person firm] has got a solid future.

“I very much hope it’s going to be a long time before I’m finished. I have the energy, the stamina, hopefully the brain will keep me going long enough and the regulators will allow me to continue.

“You get clients saying ‘please don’t retire yet, we need you’, to the extent you feel almost as if, if you had plans to retire, you wouldn’t because you owe it to them.

“It does have its problems. Often the work does pile up. Just when you think you are getting on top you get another couple of enquiries in…. But because they know you as an individual they overlook those little failings and they are prepared to work with you.

“Is there a future [for one person firms]? Particularly in financial planning terms we are probably as strong as ever.”

Acting as a smaller outfit can also reduce the costs of doing business. You might not need to engage a discretionary fund manager or sophisticated back office systems or pay for large offices, for example.

Whiting says that because the firm can charge less than the often-quoted market standard of 3 per cent up front and 1 per cent ongoing – ongoing fees at his firm scale from 0.55 down to 0.25 per cent and the rest is time costed –  he actually has had trouble recruiting any more advisers because they stand to earn less.

He says: “Clients are increasingly fee conscious. We have thought about whether we should charge more money or be more commercial, but then you are fighting against a tide where the FCA is looking at ongoing fees from the value perspective.

“Clients get a really highly personalised service from a one-man band; that’s what they love about it.”

Having the time or resources to actively go out and generate new referrals can seem like a stretch when larger advice businesses often advertise ready made client banks and leads as an incentive to join.

But Klonowski says that this does not present too much of a challenge as satisfied clients provide a pipeline of introductions, with his website and awards entries also helping build his profile.

He says: “They come with the right sort of frequency. I never need to look too far for a new one.”

In the end, many advisers in both small and large firms are confident that client outcomes will remain king, and if a one-person firm, a network or a larger outfit suits particular client needs best, then that is the route an adviser should take.

ISJ Independent Financial Planning sole adviser Lena Patel was formerly with Old Mutual-owned network Intrinsic, but says the limited product choice was why she decided to set up on her own and go directly authorised.

“It was their fund or no fund,” she says. “The funds were quite expensive for the clients so didn’t really fit with what I wanted to do or suited to calling yourself independent.

“It is tough, but its good in terms of client outcomes.”

Networks themselves can run into difficultly, as advisers at the likes of now-defunct businesses Burns Anderson and Financial Limited have found.  Depending on the network, the cut it takes can leave advisers worse off financially than if they were a one-person outfit – provided they write enough business, of course.

It is also easier to target a niche as a one-person outfit, as Patel is attempting to do with high value divorce clients.

Patel outsources some report writing and uses Simplybiz for compliance services. She also uses a paraplanner.

She says: “Without that it is going to be tough. All your report writing, all your reviews, as one person, you can’t do it. The ability to hand off things you don’t like doing is invaluable for me.”

I don’t take the absolutist view that if there’s a one-man band you can’t possibly contract with them. Ultimately people do business with people, and there are some incredibly talented one-person businesses. I’m not prescriptive: it’s not one-man bad, bigger good.

But it’s often not just one person. They may be the sole adviser, but there will be a locum arrangement to pass off if they fall ill, a paraplanner or a personal assistant. Often those paraplanners are CF30 authorised to give advice if they need to or are doing quite a lot of the routine stuff.

There is a place for a boutique intermediary, but often one-man or one-woman bands will get together with another to bulk up. I know some really good one-person IFAs but most of them are part of networks like Best Practice, which caters for quality one-person businesses.

If they’re well organised they are actively as opposed to passively collaborating with the likes of Threesixty, Simplybiz or Bankhall. Very good intermediaries have very good support.