In this week’s blog, we’ll be covering a recurring theme we see at IFA Acquisitions and that is the difference between a share sale and an asset sale. A topic taken from our recent YouTube video “Top tips when selling an IFA Business: Part 2” which is part of a wider collaborative series with prestigious UK law firm Herrington Carmichael. 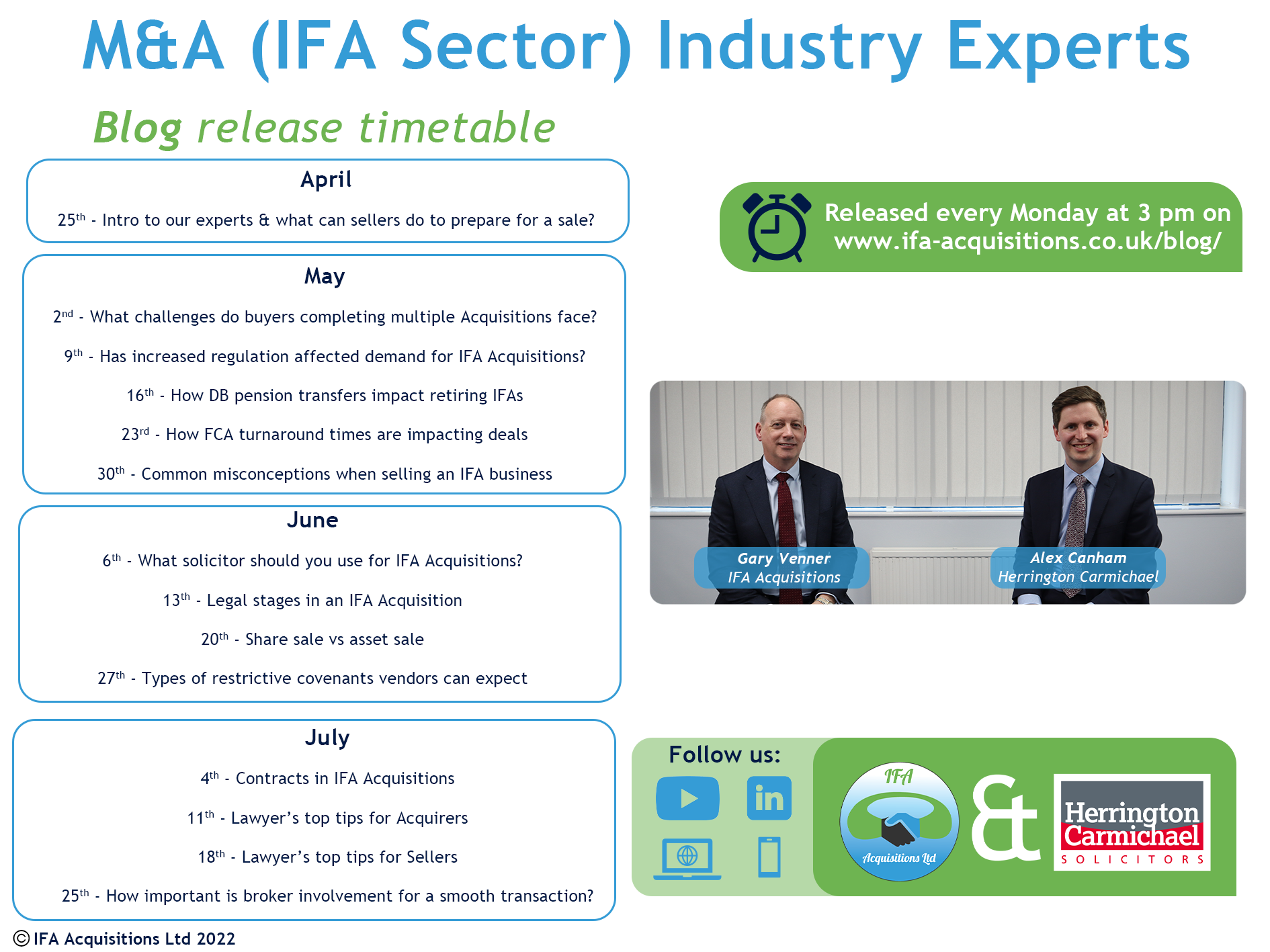 In order to effectively discuss this topic we brought in, Gary Venner Chief Executive Officer of IFA Acquisitions and Alex Canham Partner at Herrington Carmichael.

Alex expanded on this point “Restrictive covenants are going to be a feature in any transaction or contract, whether that’s an asset or share deal. The majority of restrictive covenants will last probably for about three or four years They’ll prevent, in a share transaction, the shareholders being involved in the industry for that period of time they’ll prevent them soliciting or working with the clientsfor another firm or in in another capacity to provide financial services to them and it’ll also generally prevent them from soliciting the staff by encouraging them to work elsewhere. If you’ve got shareholders who are perhaps not active in the business such as a wife or child or somebody who has long since retired or gone off to do something else and doesn’t work in the industry, then sometimes you might see them exempted from the non-compete covenant, but we still expect them to provide the non-dealing of clients and non-solicitation covenants around clients and staff. So those covenants will be time bound and we do occasionally see advisors coming back three or four years later and going back into the industry. Some of them have absolutely no intention to do that for various different reasons. I think from a buyers perspective, if you’re buying from somebody who is retiring, that the risk around covenants and things is less important. If, however, you’ve got sellers who are perhaps in their thirties or forties or even into their fifties, actually that is probably a greater risk because after three years sale on a restrictive covenant, they would be entitled to go and do that. It’s very difficult from a buyer’s perspective to have a covenant with them for longer than that period of time – it starts becoming unenforceable at that level.

Gary continued “I think in these situations, a lot of element of trust needs to be there.  When I have vendors come to us that are say In their forties or fifties wanting to sell their business most are open to these restrictive covenants being in the contract , but regardless of that, it will put off some acquirers too, because there is this concern after three or four years that they would be free to come back, which could affect their return on investment” Gary subsequently added. “Hence the Acquirer will need an element of trust over and above those covenants and indemnities of the seller’s intentions not to return where clients could be solicited and also of their own client / adviser relationships developed over the next 3 to 4 years with a strong client value proposition where clients won’t be tempted to leave”.

Alex replied “Very much so, one of the things that we find is a useful tool for buyers where we have been working on that side of the table is all about integration. Where we’ve seen issues arise in the past is where buyers don’t integrate the selling advisor’s clients into the wider business and they effectively leave them as a standalone advisor relationship. The end of three years comes around where they’ve paid them their deferred consideration and their covenants have run out but there’s actually no then loyalty between the clients and the buyer firm or the new advisors that have been put in there. So, I think from a buyers perspective, it’s not just about the covenants, it’s about how you structure the wider transaction of what you do post completion to try and mitigate the impact of that person leaving.

Restrictive covenants are an important aspect of IFA Acquisitions vendors can expect during the sale process. It is important to be clued up on what to expect and how these can impact your future business prospects. But, also what other processes need to be put in place during the deferred buyout period so that clients have been fully migrated before the restrictive covenants run out!